Goals & Dreams is a veteran-led non-profit that equips children in war zones to escape the surrounding conflict through sport and education.

Goals and Dreams was founded in 2008 by military service members returning from Iraq. While deployed they recognized the power of sport to bring broken 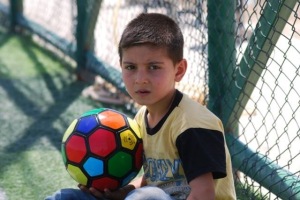 communities together and the necessity to produce opportunities in areas depressed by violence.
Sport is unique in its ability to bring people and communities together. The founders of Goals and Dreams, and indeed much of the world, were struck by this point during the Iraqi national football team’s charge in the 2007 season. As the Economist reported:

Just when it looks as if salvaging a unified Iraq will be hopeless, there comes a reminder of how strongly many Iraqis still want to live together in a single nation … After the semi-finals, crowds waved the Iraqi flag in the northern city of Arbil, where it is normally denounced by the Kurds as the symbol of the army which waged genocidal war against them. And children in the militantly Shia Baghdad slum of Sadr City chanted the name of Younis Mahmoud, the striker whose goal won the game and who is a Sunni (Aug 2, 2007)

Goals and Dreams seeks to equip this spirit in order to help kids look beyond some of the proximal sources of violence that derail hopeful futures.

Through its network of  veterans and partner non-profits, G & D has provided thousands of soccer balls and school supplies as well as life-saving humanitarian aid to children in Iraq and Afghanistan.